Once upon a time, Robbie and Cassie were in preschool together. Robbie was almost 6 and Cassie was almost 4, when the preschool planned a trip to the Columbus Zoo and Aquarium. They had sent out letters to the families inviting each to join them on this field trip. My ex-husband, Rob, and I decided to keep Darcie home from school and take her and Nichole along in my car, as Robbie and Cassie were going to ride the bus with the rest of the small preschool.

It had rained the night before, but the sun was warm and bright that late April morning. The kids decided to wait for the bus outside on the deck, since it was so warm and sunny. Unfortunately, the porch was still wet from the rain overnight, and shaded from the tree so the sun hadn’t had a chance to dry the rain. When Robbie and Cassie started chasing each other around the deck in laughter, Robbie slipped on the wet wood and slammed down face first onto the deck floor. Rob and I both rushed over to him as he started screaming. He had busted his teeth on the wood floor, and blood was just gushing. Rob hurried him into my grandmother’s house (this is where the kids and I were living at that time), into the bathroom. I followed, with Cassie and Darcie right behind me. 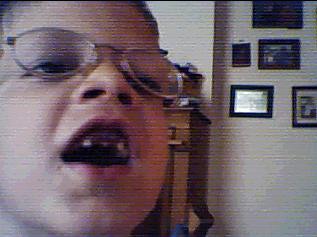 Now admittedly, I am quite squeamish at the sight of blood, and upon getting a good look at my poor little boy’s mouth, I got dizzy and had to sit down. Apparently, Cassie felt the same way, because one good look at her brother and she threw up her breakfast. So I cleaned up Cassie while Rob cleaned up Robbie. We had to make some fast decisions on what to do. We decided to send Darcie on to school (she was in 3rd grade at the time), cancelling our trip to the zoo. Rob was taking Robbie to the ER immediately, and I called my grandmother home from work to watch Nichole (who was only a year old) so I could

follow Rob and Robbie to the hospital. Cassie, after having purged her breakfast, was absolutely fine, and chose to go to the zoo with her class when the bus finally got to my house.

Robbie ended up being sent to a dental surgeon, because his teeth were broken into pieces. The surgeon told Rob that his adult teeth were “right there” and would be in within 6 months. It actually took close to four years. We got so used to seeing Robbie without front teeth that it was actually strange to see him WITH teeth when they finally grew in.

Never stopped him from eating whatever his picky little butt wanted to eat!